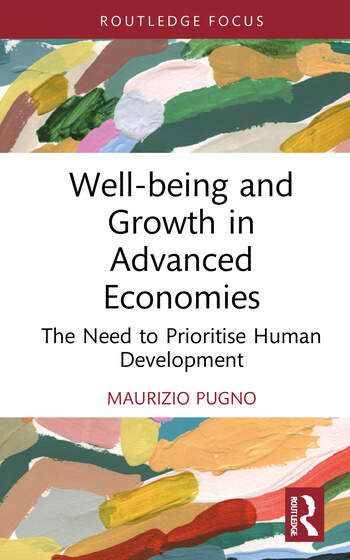 Does growth of advanced economies lead to human development, i.e., the development of those capabilities that most distinguish human beings? Are improvements of well-being thus guaranteed?

The half-century decline of well-being (both subjective and objective) in the United States suggests a pessimistic stance, aggravated by the recent pandemic and war.

Well-being and Growth in Advanced Economies argues with theory and facts that economic growth can surprisingly bring ill-being to people because it erodes their Fundamental Human Development (FHD) when market forces are prioritised, with consequent self-defeating race to consumption, including some addiction to digital devices.

‘Human development’ is here formulated as ‘fundamental’ when it expands those capabilities, such as creativity and sociality, which have determined the evolutionary success of the human species.

The book concludes that prioritising FHD in individual and collective choices would guarantee improvements of well-being, and could shape economic growth as more socially and environmentally sustainable.

Chapter 3. Why growth in market economies can deteriorate human development and well-being

Chapter 4. Economic growth and human development: which priority in the post-pandemic era?

For excerpts and commercial information, see the website of the publisher

This website uses cookies to improve your experience while you navigate through the website. Out of these, the cookies that are categorized as necessary are stored on your browser as they are essential for the working of basic functionalities of the website. We also use third-party cookies that help us analyze and understand how you use this website. These cookies will be stored in your browser only with your consent. You also have the option to opt-out of these cookies. But opting out of some of these cookies may affect your browsing experience.
Necessary Sempre abilitato
Necessary cookies are absolutely essential for the website to function properly. This category only includes cookies that ensures basic functionalities and security features of the website. These cookies do not store any personal information.
Non-necessary
Any cookies that may not be particularly necessary for the website to function and is used specifically to collect user personal data via analytics, ads, other embedded contents are termed as non-necessary cookies. It is mandatory to procure user consent prior to running these cookies on your website.
ACCETTA E SALVA